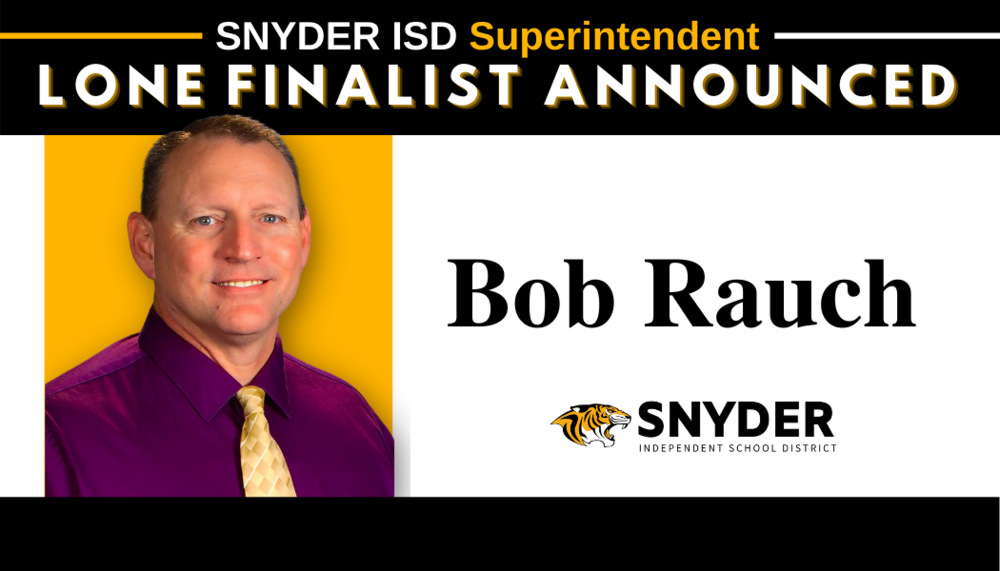 Snyder, Texas — In a scheduled meeting on Tuesday, April 12th, 2022, the Snyder ISD Board of Trustees voted unanimously to name Bob Rauch as the Lone Finalist for Snyder ISD’s next Superintendent of Schools.

The Board of Trustees found that Mr. Rauch has experienced success by being a proactive, servant leader who values and models work ethic, integrity, trustworthiness, honor, and high moral standards both professionally and personally.  Mr. Rauch stated, “Snyder ISD is a place that exudes a tradition of excellence, yet excites me with potential for improvement!”

In his eleventh year serving as the Superintendent of Sterling City ISD, Mr. Rauch has earned trust as a  community leader, increased the fund balance by over $12,000,000, balanced excess revenue budgets while managing recapture payments with extreme increases and decreases in property values, grown a multi-million dollar Education Foundation fund, reversed a declining enrollment trend increasing Sterling City ISD from 190 students to over 350 students, and guided continued academic improvement earning an academic “A” rating with the Texas Education Agency.

Bob Rauch was born and raised in Scottsdale, Arizona and moved to Texas in 1993 when attending Lamar University to earn his Bachelor’s Degree. He later attended Tarleton State University, earning a Master’s Degree in Education Administration.

He and his wife, Janet, have been married for twenty-four years.  She currently teaches first and second-grade math and is in her twenty-third year as a classroom teacher. Together Bob and Janet have two daughters, Brittany and Brooke. Their oldest daughter Brittany, graduated with her bachelor’s degree from West Texas A&M  University in May 2020. She is employed as a bank loan officer in San Angelo, Texas. She and her husband are expecting their first child, a boy, in April.  Their youngest daughter Brooke, lives in Snyder and is currently a senior at Texas Tech University and is enrolled in the Tech-Teach program. She plans to begin her career in  August 2022 as a classroom teacher with Snyder ISD. As a family, the Rauchs have committed to serving their school and community while maintaining a high level of excellence in their personal endeavors.

Mr. Rauch will replace Dr. Eddie Bland who has served as Superintendent of Schools for Snyder ISD since 2017.  In November of 2021, Dr. Bland announced his plans to retire at the end of the school year.

Whan asked about Mr. Rauch said, “I have tremendous respect for Dr. Bland and what he has been able to accomplish in leading Snyder ISD  over the past five years. I am excited about the opportunity to work with students, staff, school board, and community in continuing academic progress and improving student outcomes. I look forward to facing challenges together and enjoying the celebrations and successes that will follow!”

The Snyder Board of Trustees wants to Thank Dr. Bland for his dedication and hard work to Snyder ISD. We appreciate the time and effort he's put into making academic success a  priority  and for always wanting to do, "What's Best for Students."

State law requires a 21-day waiting period following the naming of a lone finalist before officially hiring a superintendent. Mr. Rauch's start day will depend on completing the terms of his contract at Sterling City ISD.